I’ve taken some heat for this post, but I care not. I’m pissed, as are a lot of other American glass companies trying to make it against the Goliath: China. As you read, understand this: I’m from the midwest and I served; 551st Engineers; Fort Leonard Wood. I have deep rooted sentiment tied to America and US based manufacturing jobs. I voluntarily choose, it’s my decision, to NOT manufacture in China or India and it is my choice NOT to import products. My problem with Grav is NOT that they choose to manufacture in China, it is:

1) Grav has been selling imports from China as Made in USA to artificially sustain profits and use those profits as a weapon against US Manufacturers.

2) Grav takes other peoples designs and gives them to China, not only to have Grav labels put on them, but also to torpedo competitors not wishing to sell out to China.

The owner of Grav Labs, Grav Studios and most probably his retail direct website http://www.420science.com/store.html was interviewed by one of his paid employees on a podcast on 4/19/2016. In the podcast, tucked away just after the 45 minute mark of: http://www.podcastchart.com/podcasts/torch-time-media/episodes/episode-3-dave-daily-on-gravitrons-glass-design-and-sustainable-manufacturing is a lengthy rationalization for why he has been removing the Made in China stickers from his imported pipes, all the while heavily implying being Made in USA to support a monster profit margin at YOUR expense. (Note: Since I wrote this blog, Ryan has made announcements of his intent to move 420 Science out of the Grav Labs offices.)

Here are a few quick points that need to be made:

DHGate is where China dumps it excess Grav product into the United States market. You can buy most Grav products on this website for 1/20th of what they charge brick and mortar  AND online smoke shops. 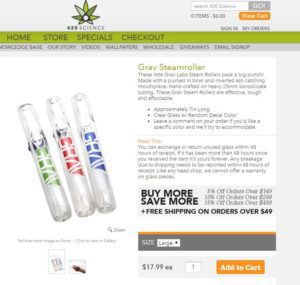 Made in China glass from Grav and the in house boys from 420 Science, just for you:

If you have an ‘identical’ product and one is 30% less than the other, lets face it, which one are you going to buy if you are also lead to believe they are both products Made in USA? That’s what we call predatory pricing. The Chameleon MSRP for the Made in USA #82 Ashcatcher Steamroller that Grav Labs ripped off is

Here’s what REAL business professionals say about China being better than US made:

The reality is that Grav is a venture capital investment that lies to it’s customers and uses clever marketing to take your money so Grav can hand a loaded gun to China to assassinate innovative, truly Made in USA, artist driven companies like Chameleon Glass.

Always ask where the Made in USA label is on your glass.